These Hatching Eggs  Toys are one of the top selling Toys this Christmas. My  daughter had an early Christmas. From the moment she saw the Hatchimals Toys  at the shop she wanted one. But then she wants many toys , just for buying them because she only plays with them for a few days and she forgets.

And I am glad I got it because this is one real special toy. This toy is ideal for kids 3 and older. Younger kids can also use it, but just be careful to remove all the pieces of teh egg shell away. It was certainly a great gift idea for an 8 year old that likes collecting stuffed animals

These Hatching Eggs toys, are so popular that some places run out of stock soon after the launch. I am sure they will be amongst the best selling toys this Christmas, so I am glad we got ours early.

Our hatchimal toy was a girl, so I will be referring through this post as she, but you could get a boy. You can decide if it is a boy or girl depending on the color and what your child decides.

These hatching egg is quite large, unfortunately I did not measure it. There is only one hatchimal per egg, and one egg per box. In a hurry? Find this Hatching Eggs Toys Here

The exciting thing about the Hatching egg is  that you do not know what you get inside. It is a surprise. But I am not convinced about this.
Apparently the idea is that the child would not know what he/she is getting, until the egg hatches. You are not supposed to guess.

But my daughter tells me she knew exactly what she was getting when she chose the box at the toy shop. She did not know the color, but she guessed the color when the egg started hatching and she saw the green beck. So if you see in the box the green beck means a purple dragon

Anyway, she was quite excited with the Hatchimal and she could not wait for the egg to hatch. The whole hatching process is part of the excitement and the adventure.
These Hatching egg toys  come in a fancy box. There is a pretend egg on the box. We thought it was the actual egg, but it was not. The egg is screwed on some extra packaging. You need to unscrew those and that is when the egg will start talking to you. What color is this Hatching Egg Toy?

The hatching egg toy come in different colors. They are all white but they have different color speckles , Ours were purple and blue, but you can get them in blue, green, pink and even light blue.

I did not measure the egg, sorry, and now all I got are the egg shells, but perhaps if we get another one I will measure it Hatchimals toys are interactive toys. This means that the child can interact and get a response from the toy. Like you can teach the Hatchimal to talk and he/she will respond with words.

This toy is suitable for kids older than 5 years old. I believe that they said 5 years and older because when it hatches the egg shell breaks in small pieces. But if you are careful and you are next to the egg when it hatches, you can then throw away all egg shell pieces and the actual Hatchimal is safe for a younger child.

Anyway, I would not leave a younger child alone with it, as these electronic animal  toys need to be treated with care.

These Hatching eggs Toys are one of the top selling toys this Christmas.

How long does it take for the Hatching Egg Toys to Hatch? 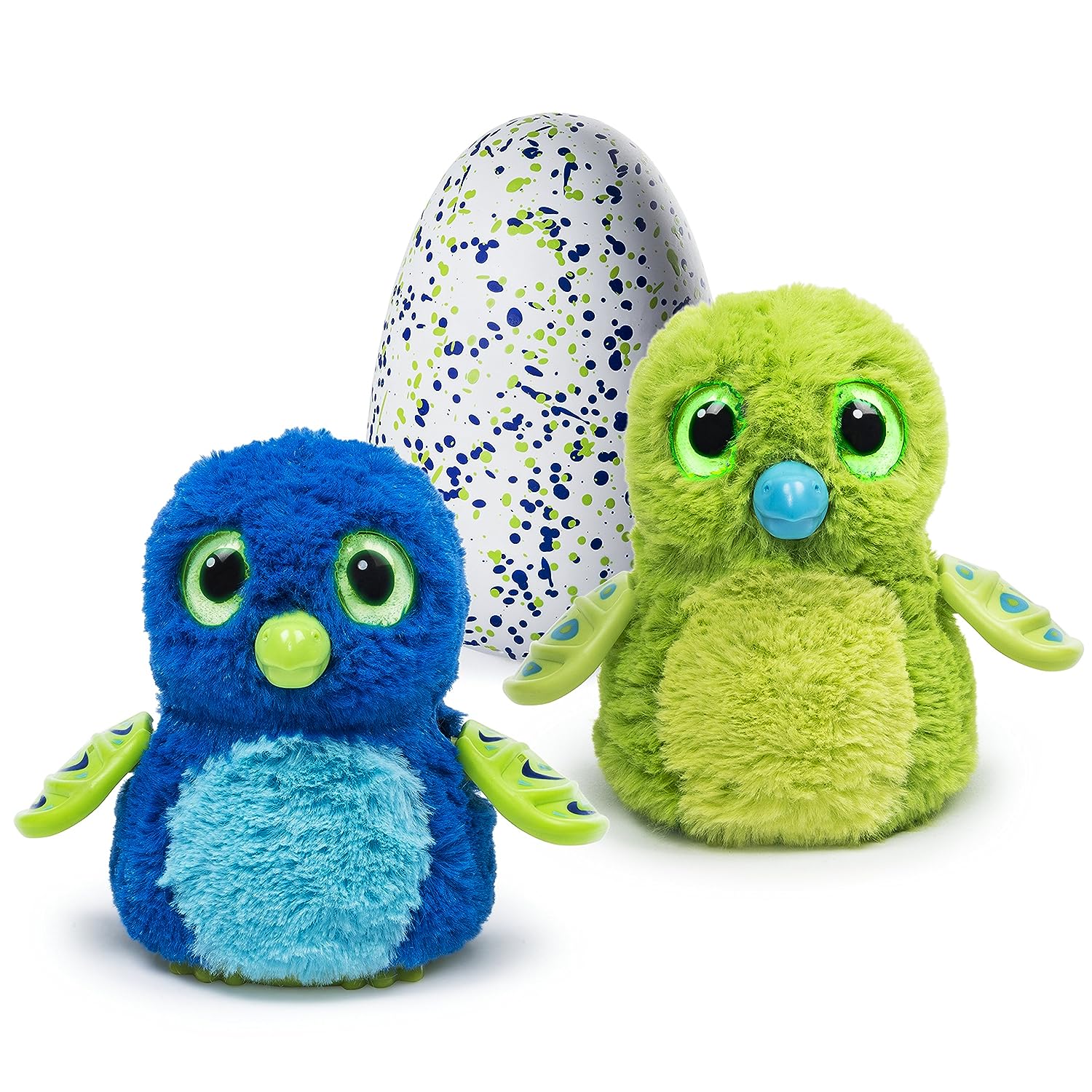 This hatching egg toy will not hatch if you do not take care of it. So don’t be concerned that the egg will hatch without you being there.

Once you take care and nurture the hatchimal egg, the egg will start hatching. The manual says that it takes between 20 to 25 minutes to complete the process. But ours took longer, or at least it seemed longer.

When the egg starts hatching, the hatchimal will go round in circles inside the egg, pecking the egg shell.

In our case, sometimes, the draggle (ours was a draggle) got stack and would stop going in circles. Then Maylla just gave her a slight knock at the bottom of the egg for it to start again. It probably got stack because Maylla wouldn’t keep it straight and she was tilting it and moving it around whilst hatching.

What is so Great About these Battery Operated Animal Toys?

These Battery Operated animal toys, known as Hatchimal,   will hatch by itself and you will get a Hatchimal.
The toy has 5 stages. There are things you can do in each stage.

What can you do with the Hatching Egg in the Stage 1- Egg stage?

The  baby in the hatching egg can start talking before it hatches, as soon as you get it out of the box and the eyes change color depending on his/her emotions, and you will see it through the egg.

You can play with the egg before hatching. These is what you can do during the egg stage:

Even when in the egg, you can see the eye colors. The eye color indicates the emotions of the Hatchimal.

Here is a table indicating what it means and what to do.

The Hatching Eggs Toys are interactive toys. This means that they will respond to an action that you do. Hatchimals can eat, talk, walk and dance. They also play games with you.

There are several kind of interactive pet toys. One other one quite popular is the Tekno Newborn Kitty.

What Happens to the Hatchimal during the Hatching Stage?

When you see rainbow color eye in your egg, then the Hatchimal toy is ready to hatch. Yuppee!

The hatchimals toys will not hatch without you. You need to nurture it. Hold the bottom of the egg to start hatching.

Below you see an image, I cannot distinguish now the color of the eyes (red arrow), it seems to be a light blue , which means I am cold.

The blue arrow shows the part where the shell started to crack,

In the image below you will see the egg cracking, and you can see the draggle beak. And below is the whole hatching process. As said the instructions say it should take between 20 to 25 minutes, but I think it took longer. Our hatchimal is purple, but in some of the photos it came as blue.

You can also watch a video when the egg hatches. Skip to  minute 5:41 to hear heart beat and then see it hatch. Once you got rid of all the egg shell, you will need to pull out the hatchimal. Pull strongly  I wish I knew what we did exactly. We battled to pull the draggle out. You need to pull hard until you hear a click.

The base of the egg has a mechanism that was used for the hatchimal to turn around in circles while pecking.

If you accidentally break the hatching egg before it hatches, you will need to remove the Hatchimal toy from the egg. You cannot repair the egg. So be careful how you handle this Hatching eggs toy..

What type of Hatchimals Toys Can you Get?

There are different hatchimals that you can get, and you  do not know what you are getting, but my daughter said she knew what she was getting just from the box.

Some of the Hatchimal types you can only get at a specific shop.

The most common ones are Hatchimal draggles (dragons)  and  Hatchimal Pengualas (penguins) which you can get at Amazon.

Then you have the Hatchimal  owls, which are called owlicorns and you can get from Toy R us.

The Hatchimals Bears, called Bearakeet, can be purchased at Target

You can get a Hatchimal Burtle at Walmart.

ALl these hatchimal toys come in different colors, but you cannot choose the color. 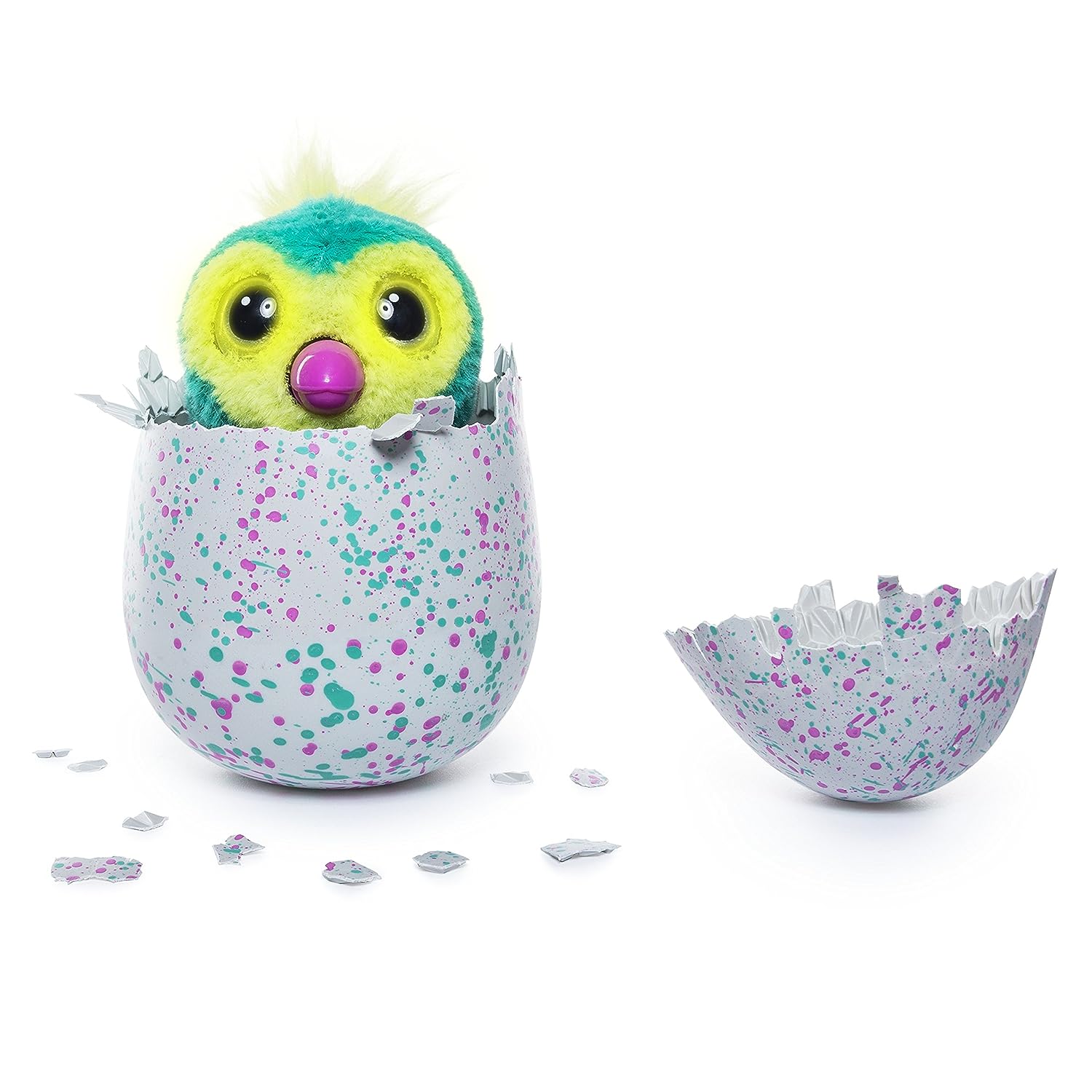 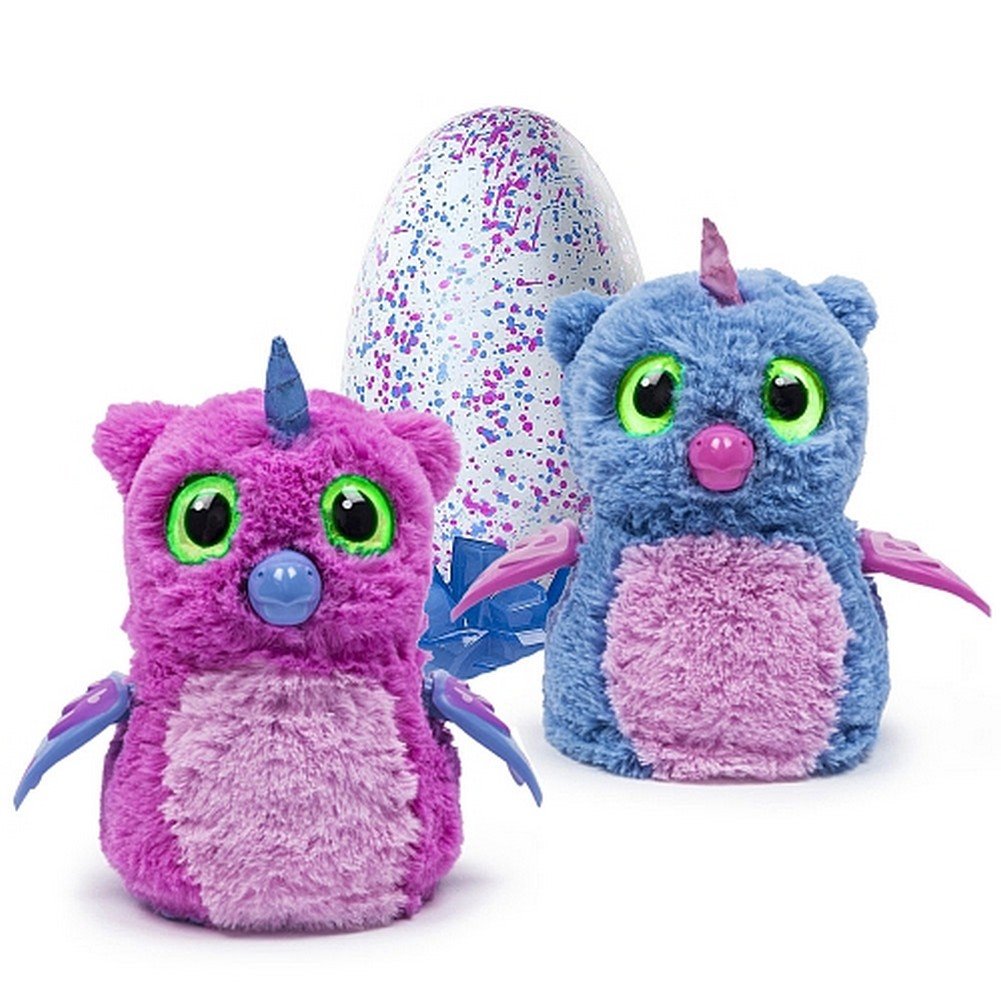 Hatchimals Owlicorn Pink/Blue Egg – One of Two Magical Creatures Inside

General info about the Hatchimals Toys

The hatchimals are battery operated animal toys. The toy comes with two AA batteries. They suggest you change the batteries after hatching, but we have not yet changed.

These are one of the best electronic toy animals of 2016, and is one of the top selling toys this Christmas.

These electronic animal toys are cute and they need to be cared for. Do not leave them in the sun, as the color will fade. Do not submerge them in water. Clean gently with a damp cloth. Once the egg has hatched, you get the baby stage. You cannot go back to the Hatching egg stage.

During the baby stage you get to play with it and care for the baby. Then you can pass to the toddler stage.

During the toddler stage you can teach them to walk, talk and dance. You can play with your hatchimal toy as well.

Then you pass to the Kid stage where you can play different games.

You can always reset the toy from the kid stage to the baby stage. 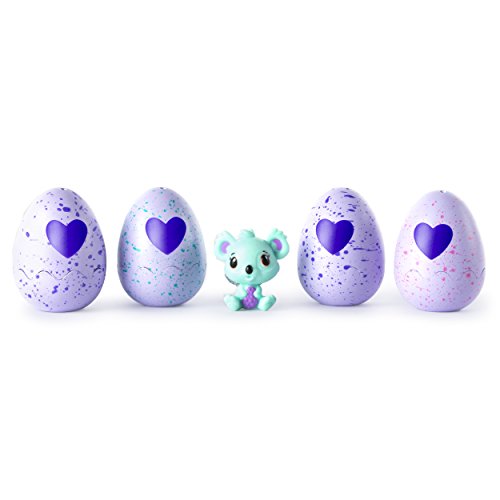 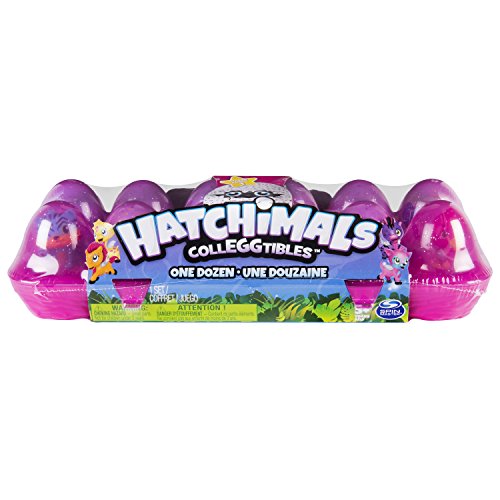 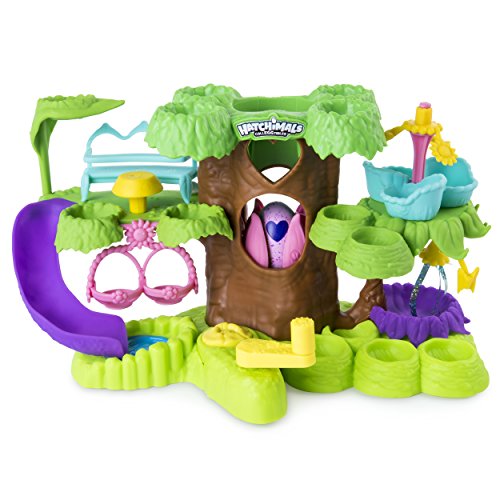 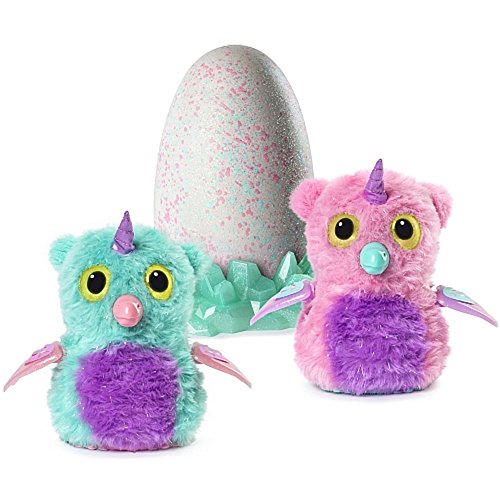 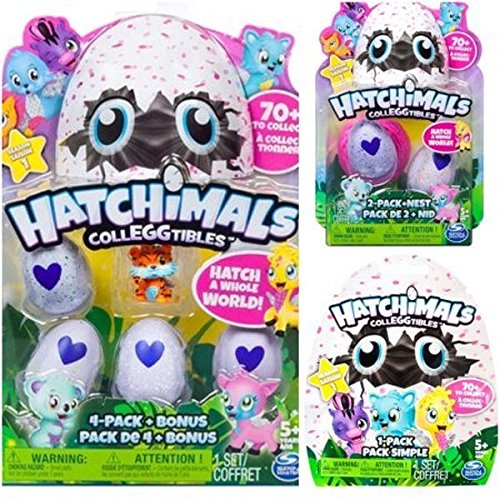 In conclusion, we were happy to get this toy. Maylla also has some other electronic pet toys, like the Tekno Newborn Kitty, but she loves the Hatchimal most.

Watch a video of my daughter playing with her Hatchimal draggle.

Hi, I 'm Maylla and together with my mom we review toys and other gifts for girls. I love toys, and I love unboxing them. < > Our toy reviews are intended for adults. These reviews are done by my mom for your parents to decide if it is a good toy for you to have. < > We review mainly toys that we own, but sometimes we will be reviewing toys we would like to buy. < > You can also visit my0 youtube channel Leave me a comment if you like and I will reply.

Maylla Playz is a participant in the Amazon Services LLC Associates Program, an affiliate advertising program designed to provide a means for sites to earn advertising fees by advertising and linking to Amazon.com. All opinions expressed in these reviews are our own. We are in compliance with the requirements of COPPA (Childrens Online Privacy Policy Protection Act), we do not collect any information from anyone under 13 years of age. Our website, products and services are all directed to people who are least 13 years old or older.